FIND OUT HOW!
You are here: Home / Travel / Mardi Gras at Universal Studios 2021

However, we wondered if it would be as good as in previous years. If you’re reading this after 2021, don’t worry, I’ll keep it updated yearly as restrictions (hopefully) continue to diminish.

Before we talk about Mardi Gras, let’s talk about rental cars. I like to get around as needed while on vacation, so I want to rent a car.

I recommend renting a car from Discount USA Car Rental. They offer the best rates available whether you’re flying into Orlando or Sanford.

So, what is Mardi Gras at Universal normally like? Well, it’s typically a celebration with food, a nightly parade, and a concert series.

And yes, for those wondering, it’s a very family-friendly version of the New Orleans street party. 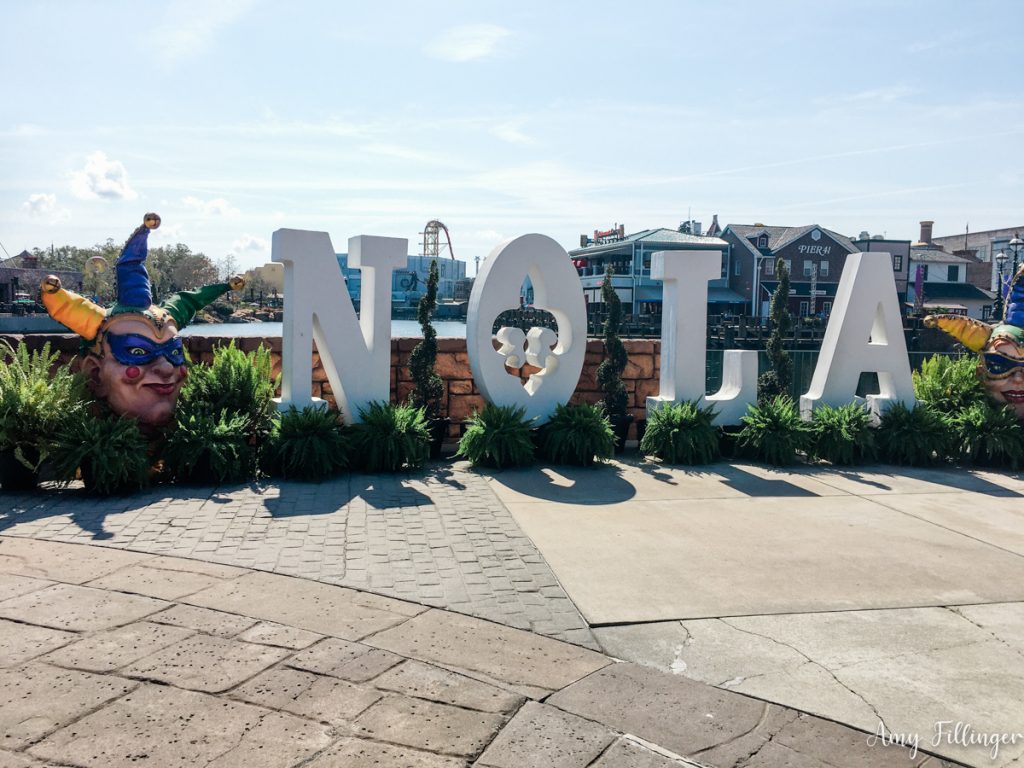 How is Mardi Gras at Universal different?

The most significant difference is that there is no concert series. There are also floats stationed around Universal Studios rather than a big parade.

Personally, I love the free-standing floats. You get an up-close look and can enjoy the floats all day instead of just in the evening.

I did notice that all of the floats were not out, but there were quite a few to enjoy around Universal Studios. 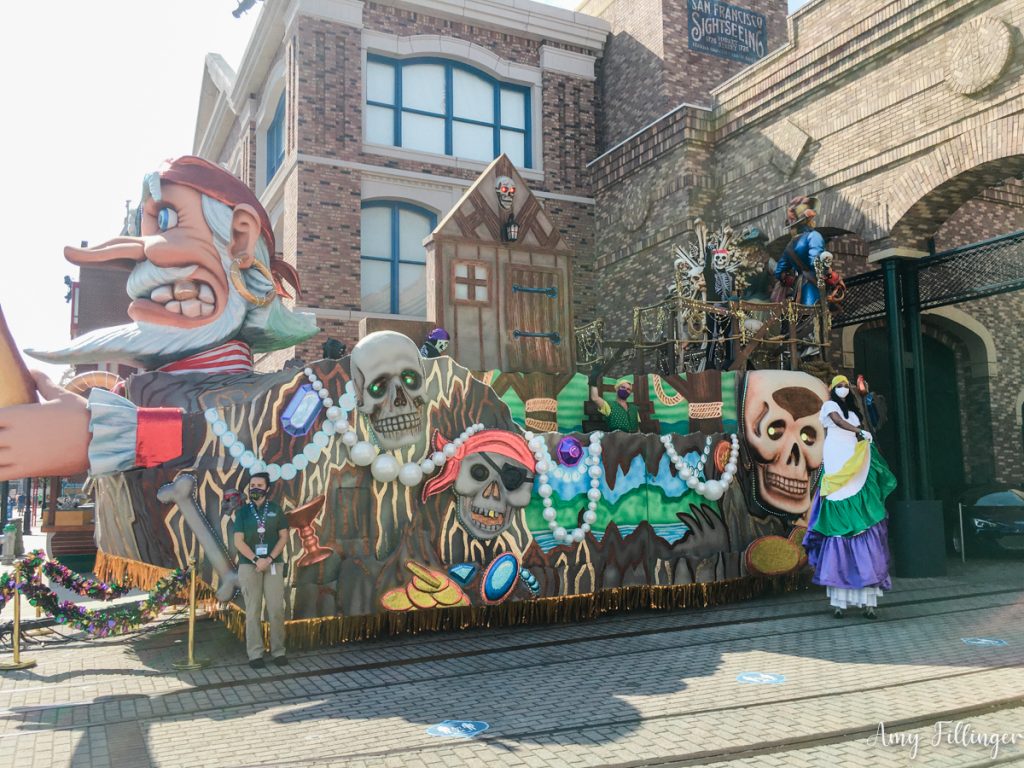 Mardi Gras also had many more food offerings this year, including vegetarian, vegan, and gluten-free options. Don’t worry; there will be more on the food below.

The food offerings were even given a unique name this year, International Flavors of Carnaval.

If you’re planning a Universal trip and following a special diet, check out my vegan at Universal or gluten-free at Universal guides.

First, let’s go over a few FAQs about Mardi Gras. 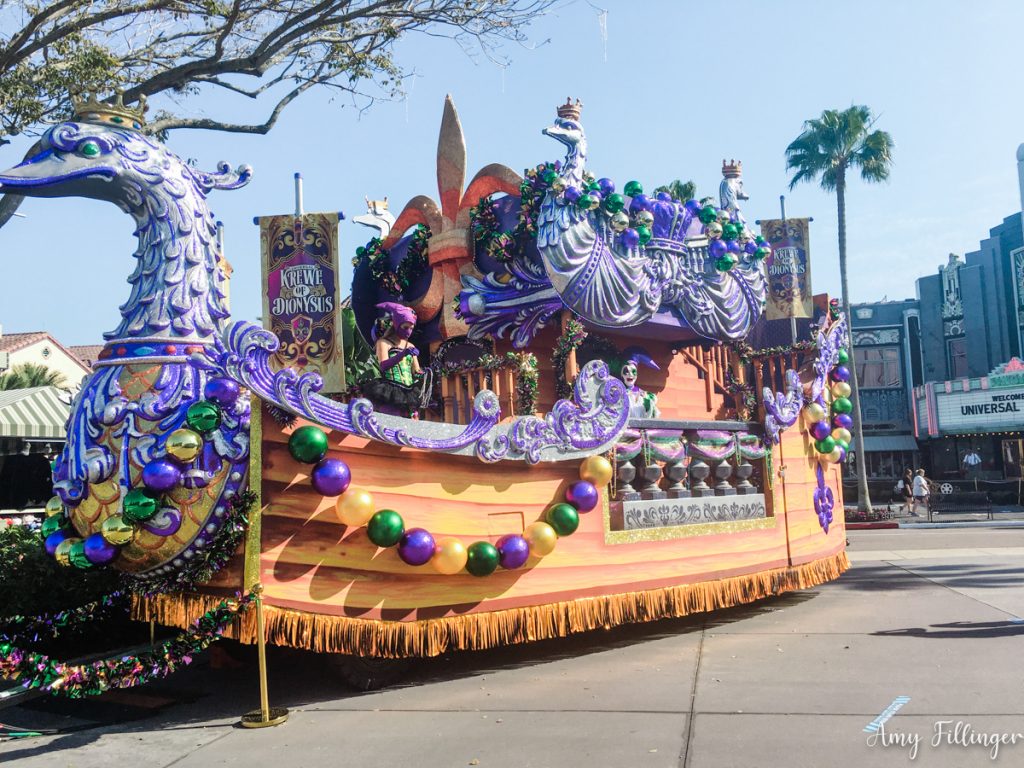 When is Mardi Gras as Universal Studios?

Mardi Gras is from February 6th to May 11, 2021. It was originally scheduled only through March 28th but was extended several times.

Do you need a ticket for Mardi Gras at Universal Orlando?

One of the best parts about Mardi Gras at Universal is that it’s included in the admission price.

Is Mardi Gras at Universal family-friendly?

Yes! Mardi Gras at Universal Studios is not only family-friendly, but it’s enjoyable for all ages. 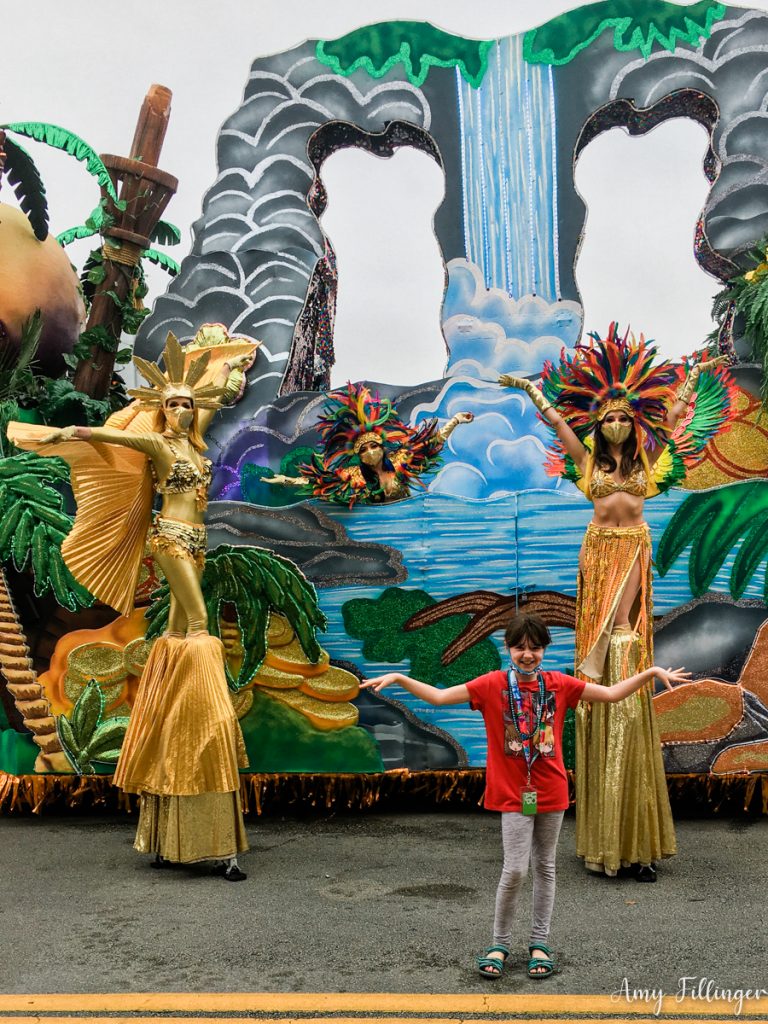 We’ll get to the other stuff later, but first, let’s talk about the Internation Flavors of Carnaval at Universal Studios in 2021.

I was chatting with a team member about the expansion of the food lineup for 2021. We may have lost concerts, but Universal more than made up for it with all of the food! 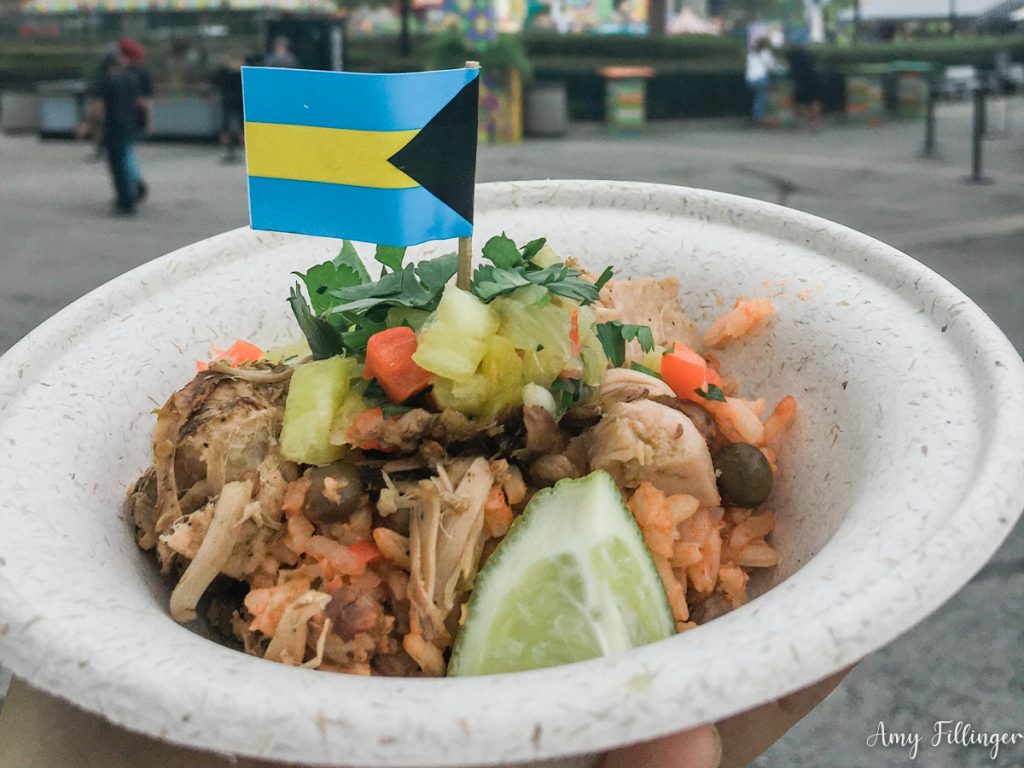 Jerk Jackfruit from the Bahamas booth.

There was also an impressive amount of gluten-free, vegetarian, and vegan options. Being strictly gluten-free, I wasn’t expecting to eat anything at Mardi Gras, and I ate a lot.

I took photos of the various booths around the park to give you an idea of what was available. Of course, there were multiple booths for traditional Mardi Gras food, such as beignets, crawfish, and king cake. 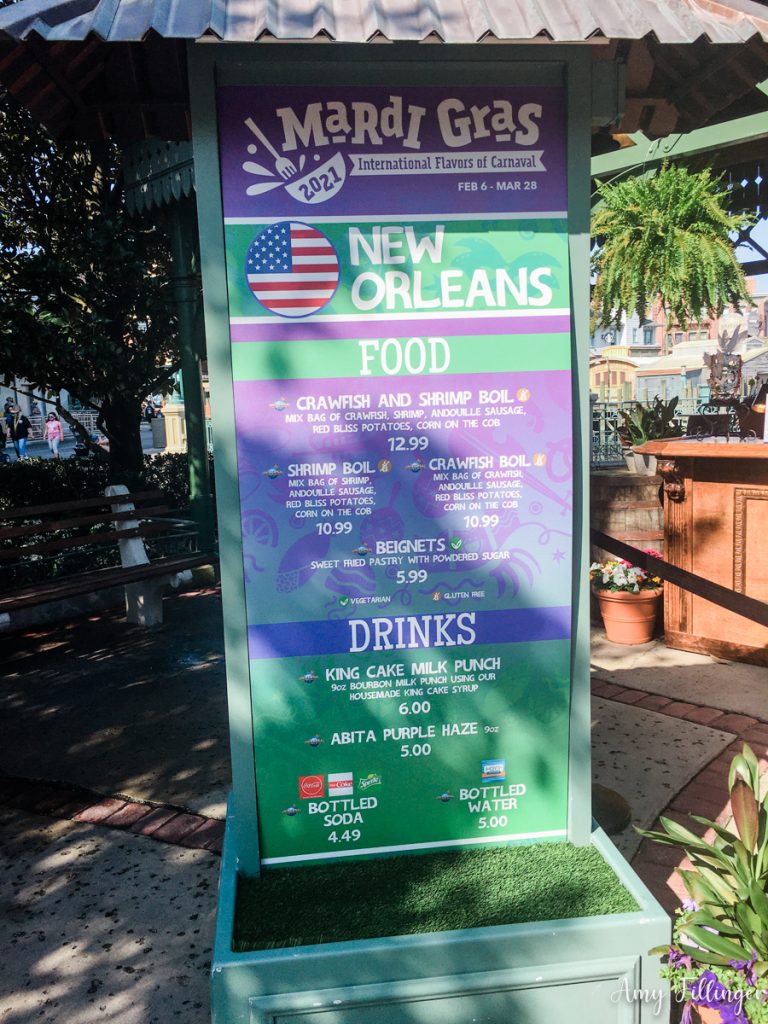 If you want to try everything, Universal offers a tasting lanyard where you can try 10 or 15 items. I should have bought one but did not because I didn’t realize how many different options I could actually eat!

The tasting lanyard is a great way to save money, and I would highly recommend it. If the food offerings are this good next year, I’ll be getting one right away. 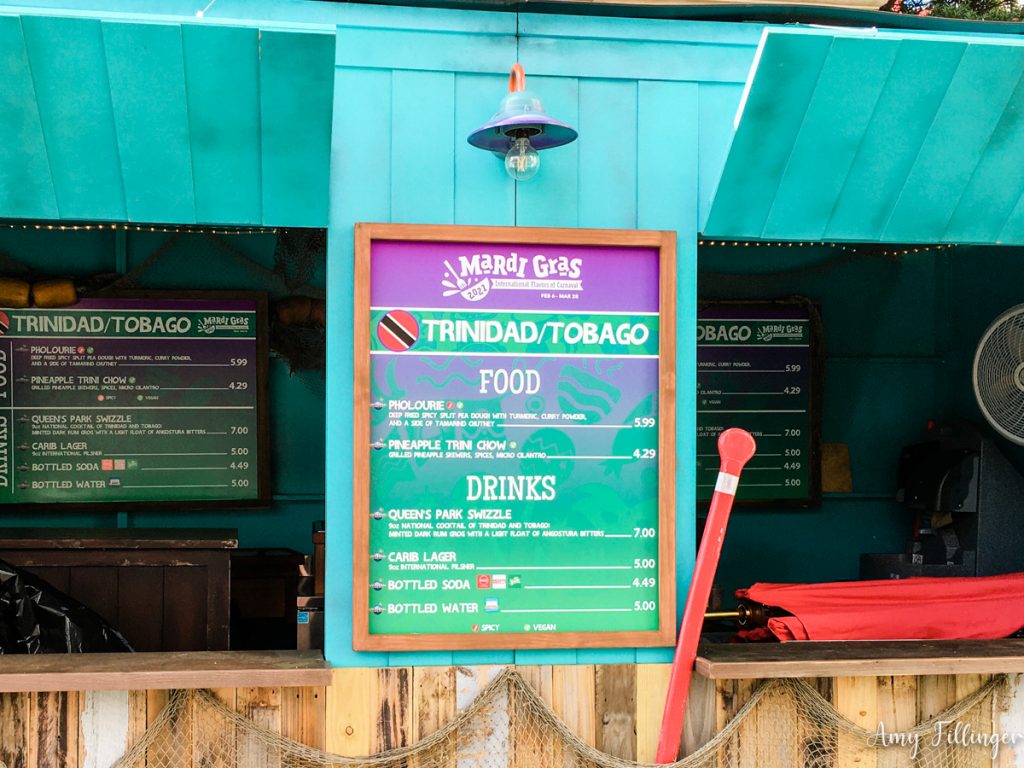 Nothing gluten-free here but both options at the Trinidad/Tobago booth are vegan! 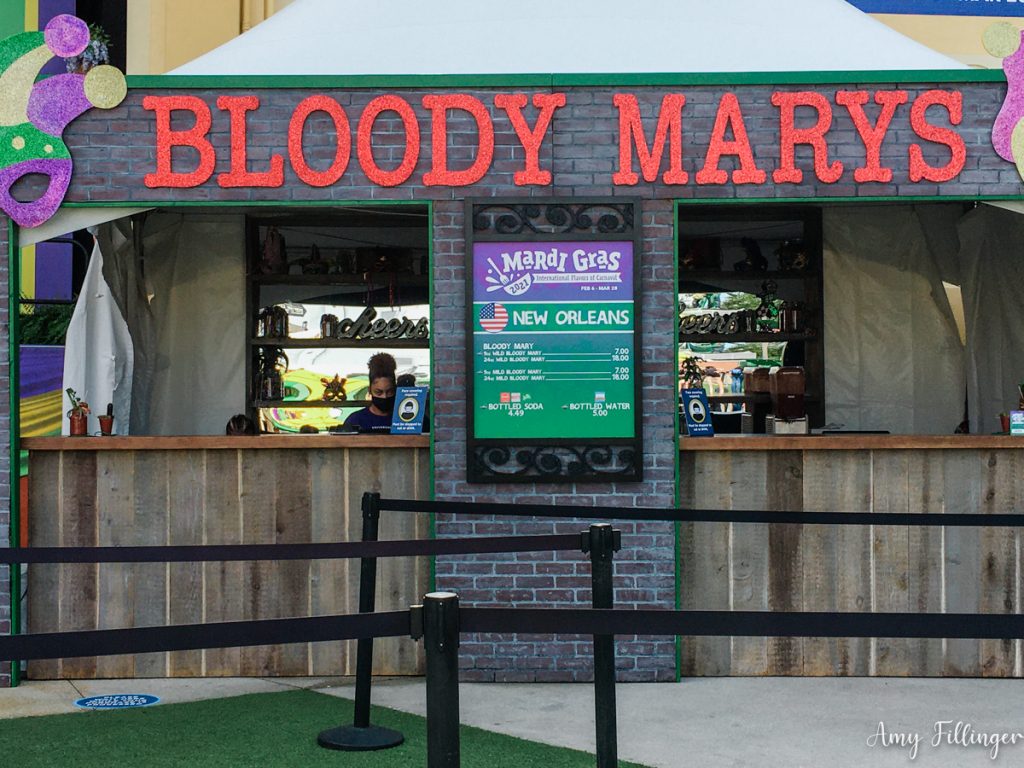 If you’re in the mood for a Bloody Mary, check out this booth right next to the stage. 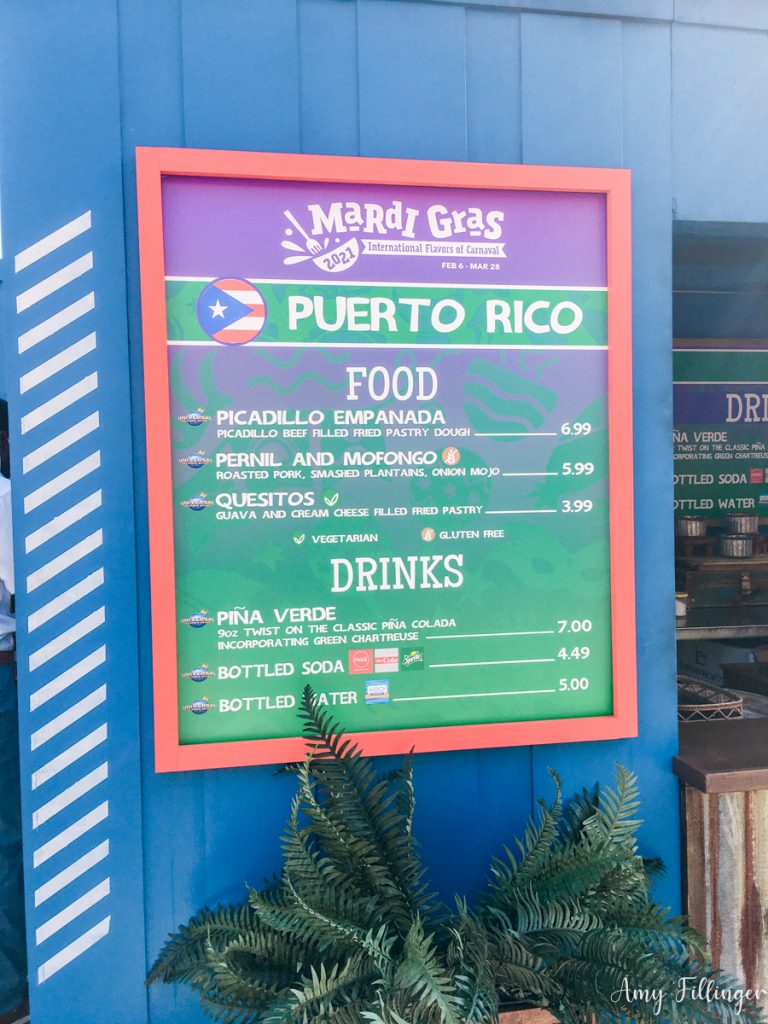 I didn’t try anything at the Puerto Rico booth, but it must have been good because the line was always long! 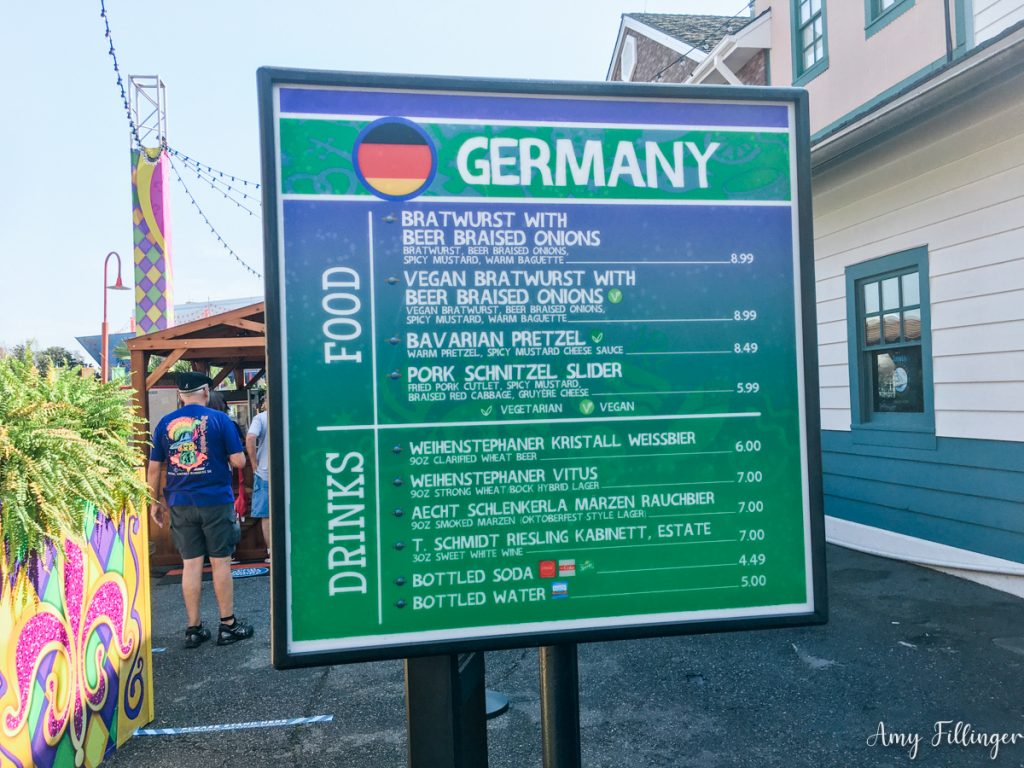 Germany didn’t have any gluten-free options but plenty of vegan and vegetarian dishes. 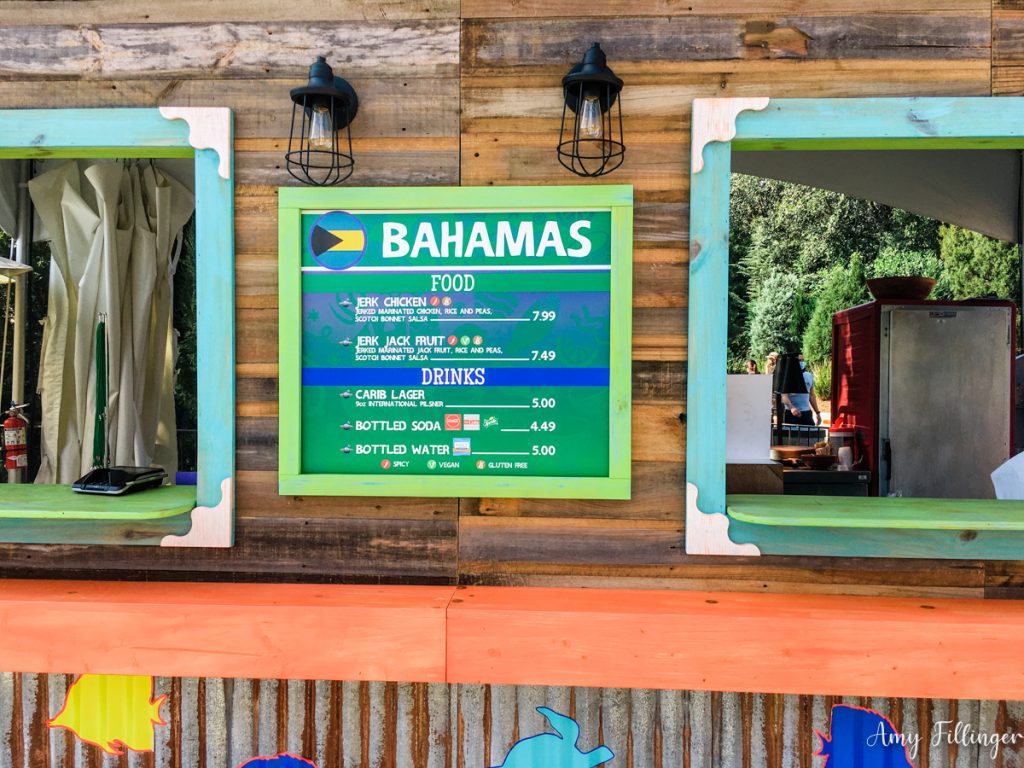 We tried to jerk jackfruit, and it was so good! It was spicy (obviously), but my kids enjoyed it.

There is also another Bahamas booth right next to this one with a rum punch. I sampled it for you, and it was delicious; you’re welcome. 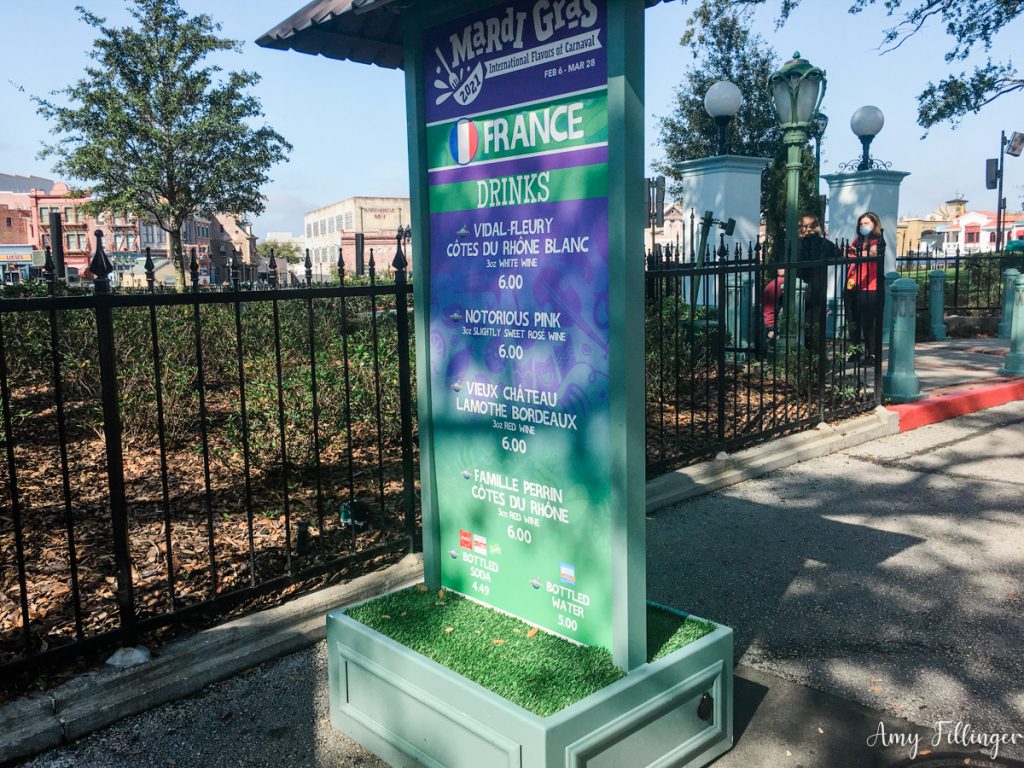 I didn’t try any of the wines, but if you did, let me know the best one in the comments! 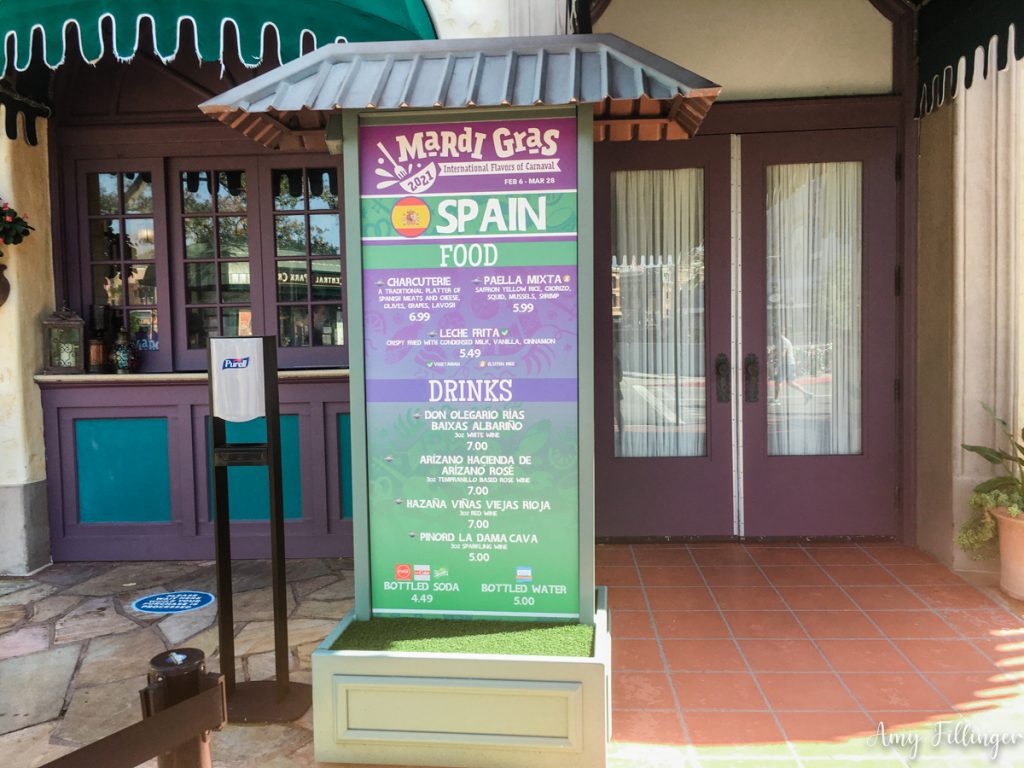 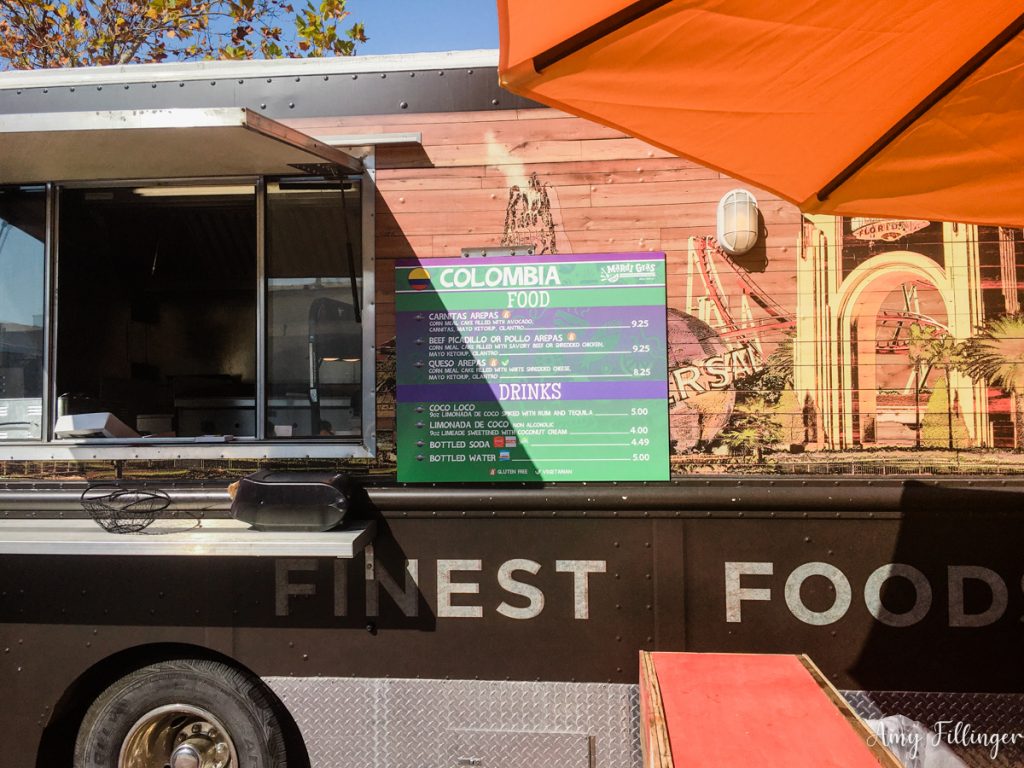 Every single option at the Colombia booth is gluten-free! 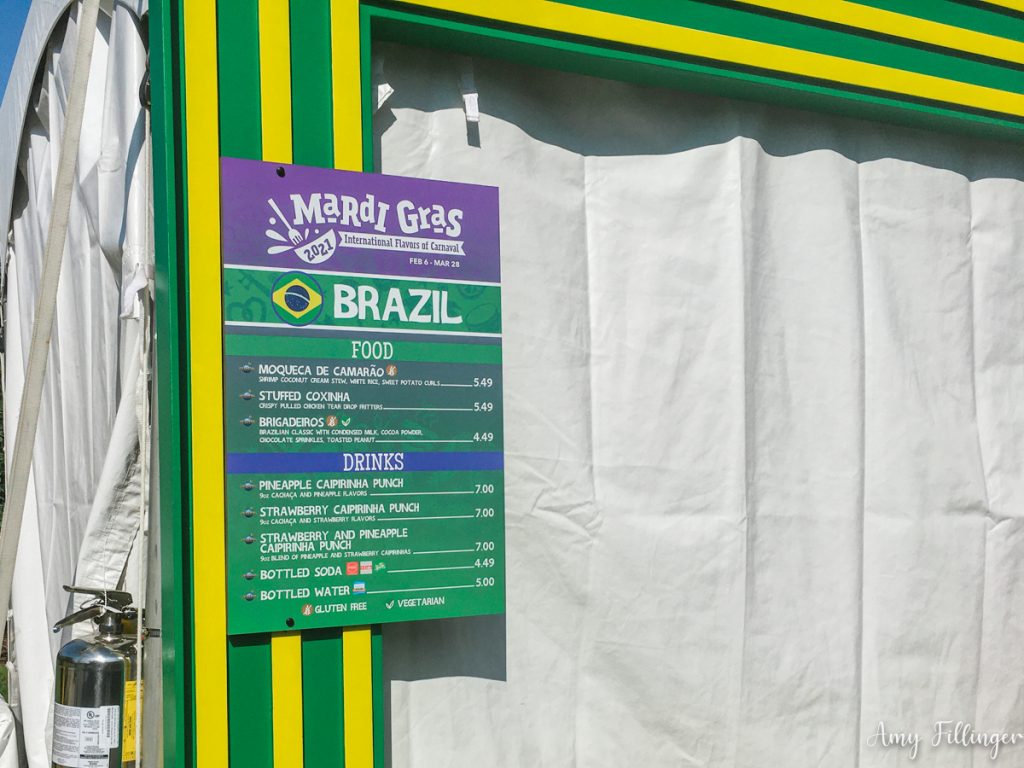 I didn’t try any of the food at the Brazil booth, but the strawberry caipirinha punch was fantastic! 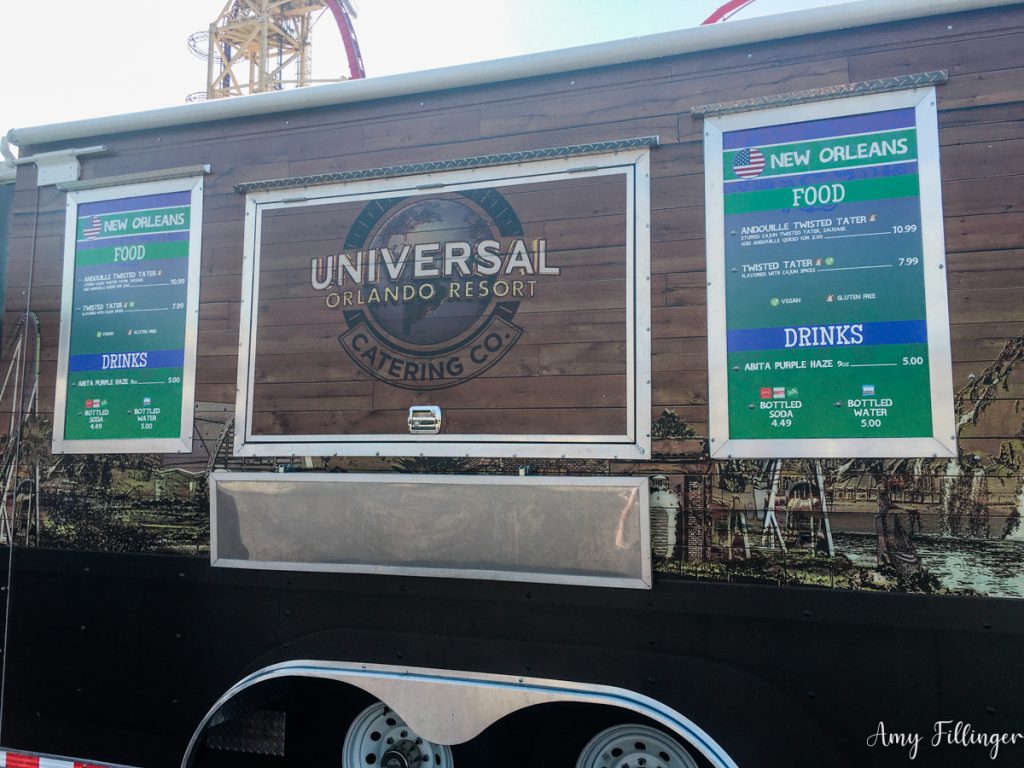 We loved the twisted taters so much that we had two. If Cajun seasoning is a bit spicy for you, there are other options not on the menu. My kids preferred the Cajun seasoning.

One word of caution if you’re gluten-free, the Abita Purple Haze is beer.

It doesn’t sound like beer, and the team member said he didn’t know what was in it, but it was beer. I had to give it away after they handed me a can that said “lager” on it. 😉 Beer has gluten in it, for those who don’t know.

There was also a Canada booth in Woody Woodpecker’s kid zone that I completely missed. I did find out they only had doughnuts and poutine, so nothing gluten-free, but both sound excellent. 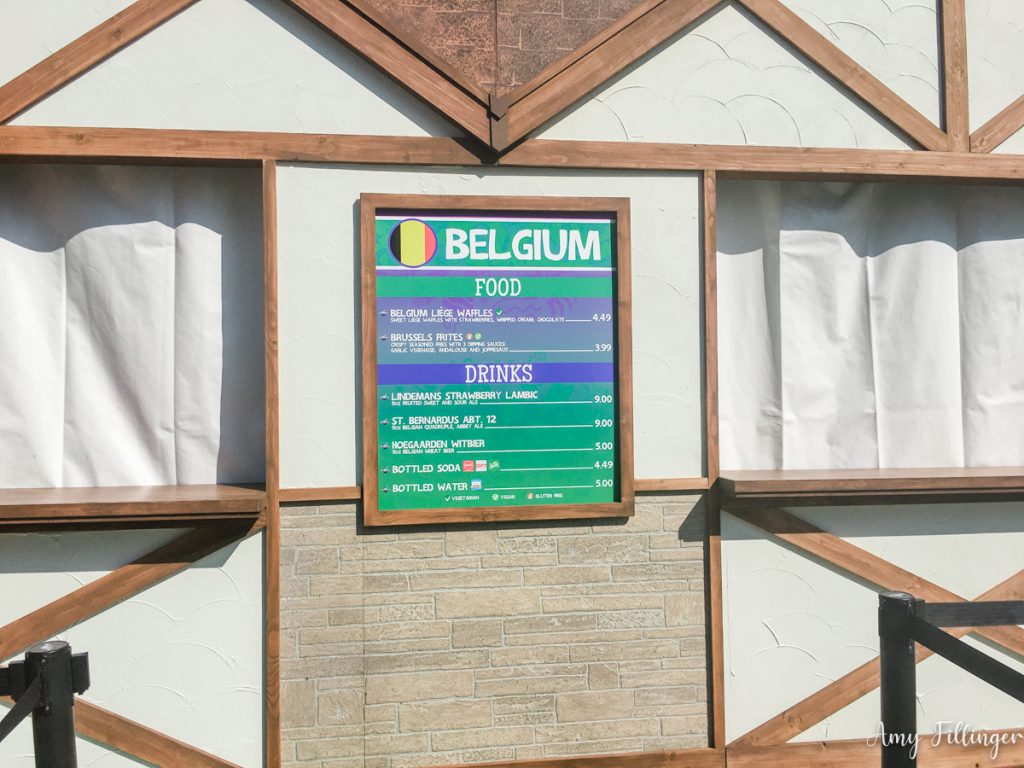 Last but not least, my favorite booth was Belgium. The Brussels Frites (fries) were so good! They were also vegan and gluten-free. If you don’t have Celiac Disease, you don’t understand how rare it is to get fries. 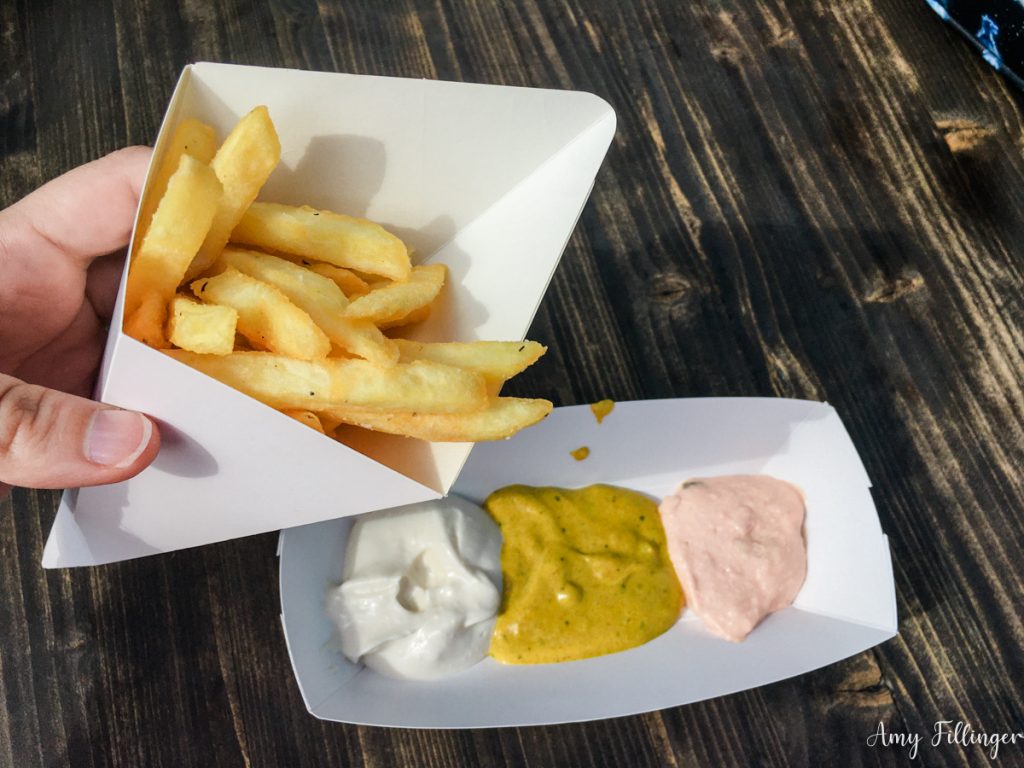 The white sauce is garlic veganaise, and it was our favorite. My daughter, who is not gluten-free, also got the waffle and said it was delicious.

For the second time, the Tribute Store was decorated for Mardi Gras. I completely forgot to grab some photos, but it was a fun walkthrough.

You can find the Tribute Store next to The Mummy indoor roller coaster. The Tribute Store is also set up for Halloween Horror Nights and Christmas at Universal, so make sure to check it out anytime that you can.

In past years, park guests could try and get a spot on parade floats to throw beads. With no parade, this wasn’t an option this year. 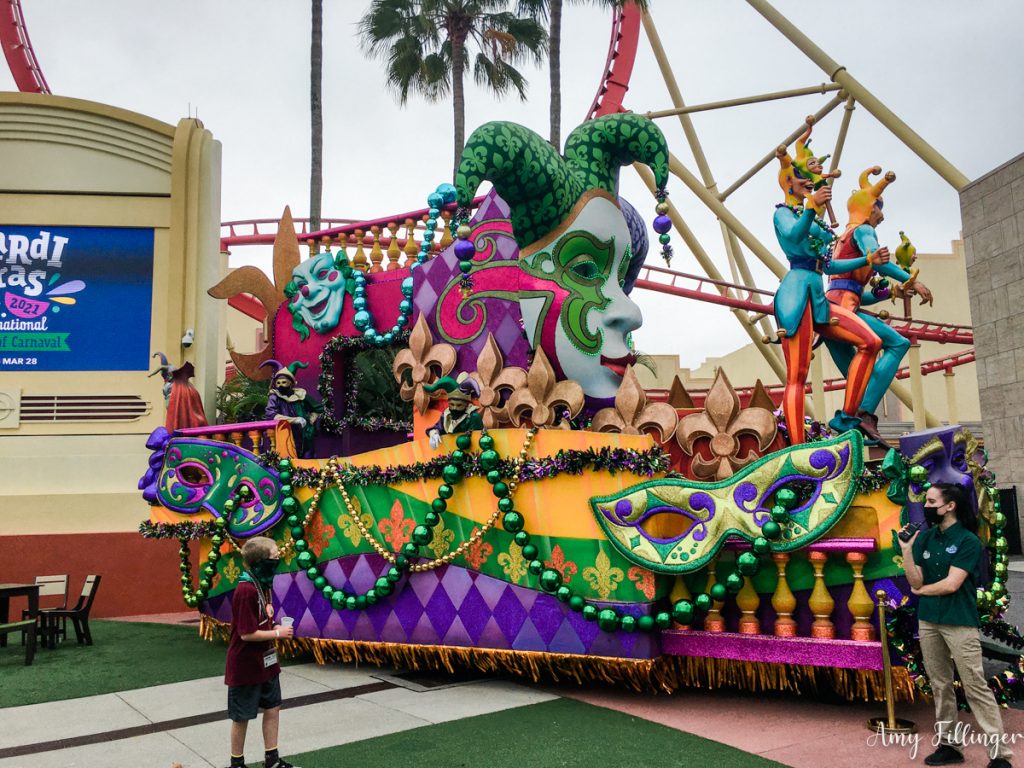 Not to worry, bead lovers, there are plenty of beads for everyone. The majority of the beads are free and thrown from floats and Mardi Gras performers. There are also specialty beads around the park for purchase.

Occasionally the performers would ask you to dance for the beads, which is a lot of fun. And, again, very family-friendly. In fact, kids seemed to have a lot of fun dancing for beads!

You’ll still find the stilt-walkers and all kinds of fun “characters” at Universal Mardi Gras. From pirates to alligators, to birds, maybe?! They’re all so much fun! 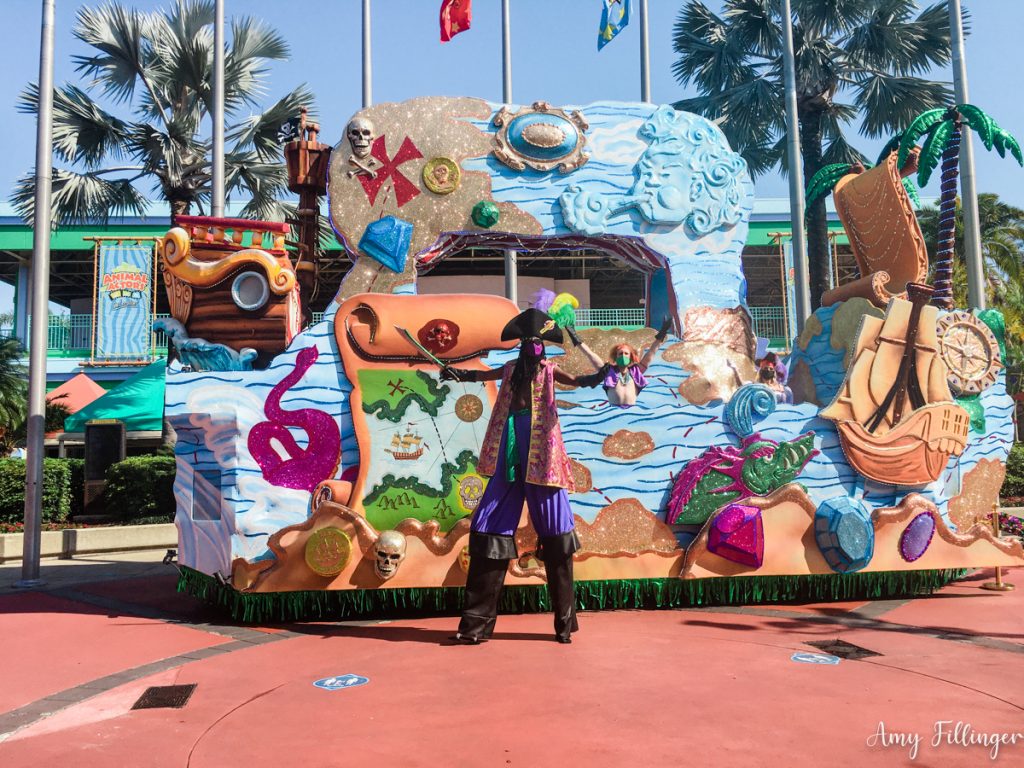 Is Mardi Gras at Universal worth it?

If you’re trying to figure out if Mardi Gras at Universal is worth it, the answer is yes! The food is tasty, the performers are fantastic, and it’s just another layer of fun for your Universal Orlando vacation.

If you’re planning a Universal vacation, make sure to check out my most popular Universal blog posts:

My number one tip for an epic Universal vacation is to stay at a Universal Resort. You can check prices for Universal Orlando resorts here:

If you’d prefer to stay offsite, check out other Universal area resorts on Expedia. You can also look at vacation rentals on Airbnb. If you use my link, you can save $55 on your first booking.

I have reviews for Cabana Bay Resort vs. Aventura and Royal Pacific if you’d like to check them out.

Although I am a graduate of the Universal Orlando Resort Travel Agent Training Program, I’m not taking on many new clients for 2021. However, you can contact me to check availability.

If you love learning the latest theme park news, sign up for my weekly email for all the latest! 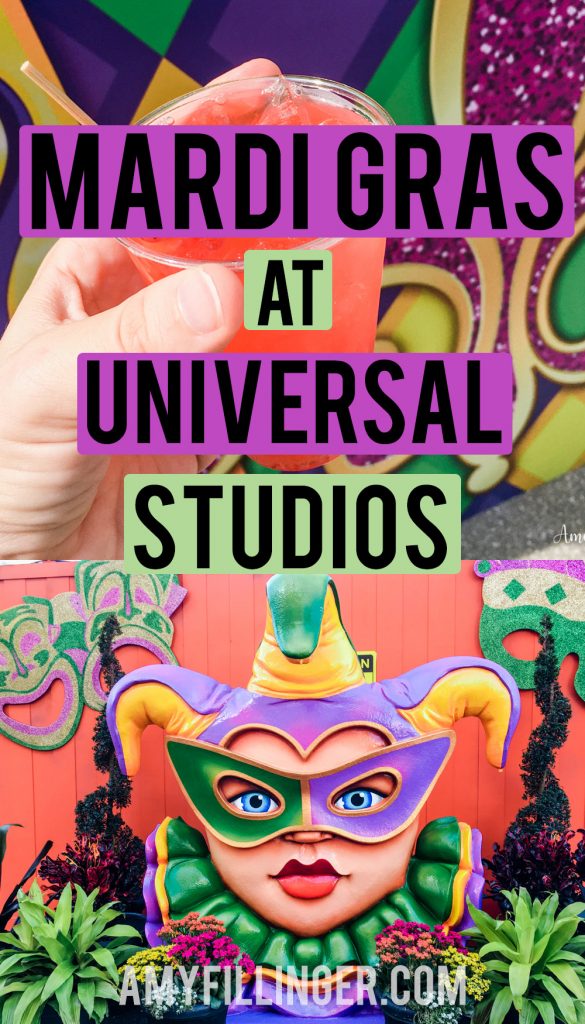 What to pack for Universal Studios (and what to wear at Universal)
Next Post: Marriott Cypress Harbour Villas Review and Tour